Blood Matters – In More Ways than One

This is the story of an 18-year-old girl, Asha (pseudonym), who eloped to marry the boy she loved and subsequently settled in a village in Kotjahari, West Rukum.

Recently, she was squirming in pain and the couple did not know what had happened to her. Even though estranged from her parents, seeking for care and help from her loved ones, they went to her parents’ home, a remote village in Jajarkot District, 12 hours on foot from her current home in Kotjahari. Her parents are firm believers in traditional healers and shamans, so for two whole days while bed ridden, the witchdoctors chanted prayers and carried out their traditional healing methods in hopes of her recovery.

The husband seeing his beloved wife still in excruciating pain, which did not recede even after two days of traditional healing, forcefully insisted and rushed her to our Chaurjahari Hospital in West Rukum District in an auto rickshaw, which took them 2.5 hours.

Upon her arrival, the doctors immediately carried out an ultrasound and discovered that she had an ectopic pregnancy, which had ruptured and caused her to bleed about 2 liters of blood internally. The doctors also stressed that they had arrived just in time to save her life.

The doctors quickly ascertained that if they had to transport her to another hospital, she would most likely lose her life on the way. Since there is no blood bank available neither at the hospital nor in the vicinity, the hospital staff quickly arranged for 2 liters of blood by immediate donation from a hospital staff’s relative and the husband. Following this, our gynecologist operated on her, saving her life and bringing her out of the miserable pain. Due to Asha’s poor living circumstances, she received free treatment from our hospital.

The matter of the absence of a blood bank and the lack of confidence in modern medicine still persists in many communities around West Rukum, Salyan, and Jajarkot District; the hospital’s catchment area. Thus, Chaurjahari Hospital administration and doctors have begun a Blood Grouping Test campaign, wherein they set up camps to test and find out the blood group of individuals in order to contact and mobilize these people to donate blood in case of emergencies. So far, the hospital has managed to carry out these camps in eight localities and have established contacts with 551 people and plan to cover all three districts surrounding the hospital eventually. 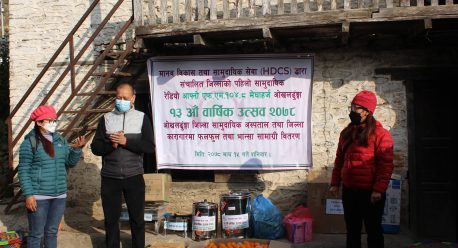 Love All Around! Afno FM in Okhaldunga, for the past 13 years, have... View more